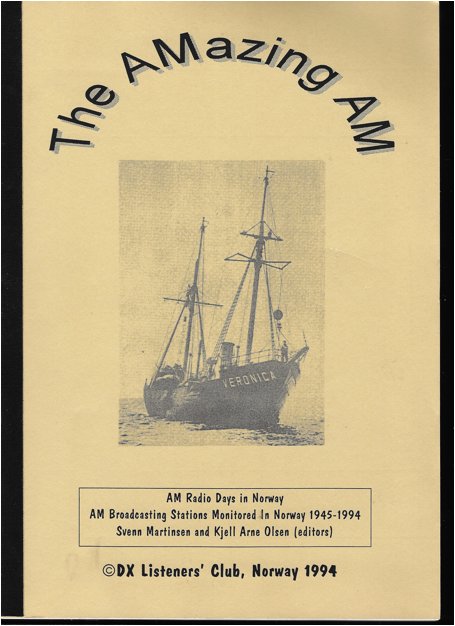 AM RADIO DAYS IN NORWAY

AM BROADCASTING STATIONS MONITORED IN NORWAY 1945-1993. 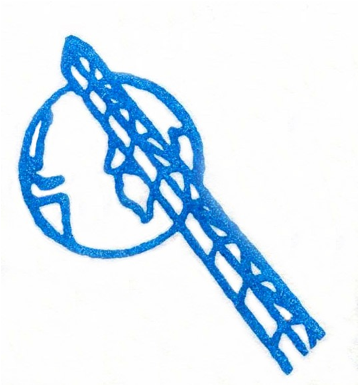 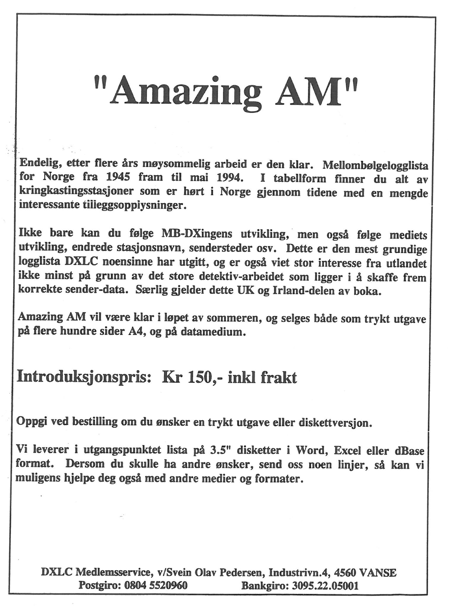 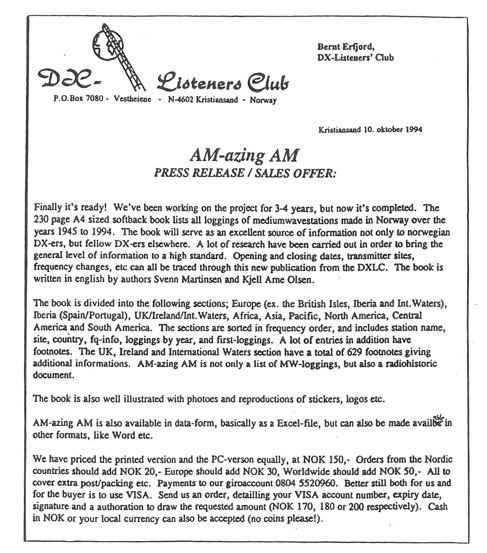 Edition closed on May 1st, 1994 with a few additional corrections since then.

This is the 3rd edition of an enormous collection of Long-and Medium Frequency Broadcasting Stations monitored in Norway.

It first appeared in 1974 with Arvid Frøsland and Svenn Martinsen as editors. A new edition emerged in 1979 with the same persons in charge, while the current edition has been worked on since the middle of the 1980s, with a special intense period since 1990.

The task has been particularly difficult this time.

Both editors have been very busy in their daily work.

We have also witnessed a vast amount of changes during the last  years, within ex-USSR, East Europe, Germany etc., and it has been quite a challenge to stay in touch with all those changes.

A lot of work has also been put into the fields of Ireland, UK, International Waters, Holland, incl. the land based pirates there, Military stations etc.

Then, the collecting and editing of notes for the separate countries and parts of the world have taken much time. In the end, one Apple Macintosh(and a 50 MHz 486 PC for the final formatting) computer at each of the editors did a great difference. We have used one of the better spreadsheet programs (Microsoft Excel 5.0 for Windows/4.0 for the Mac), and we are able to supply data in these and other data formats for DOS/Windows and the Macintosh. The basic listing of material has been done by Kjell Arne, while the finishing work for the European, African, Asian, North American, and Caribbean parts has been done by Svenn.  The finishing work for Latin America, and the lay-out for the whole publication was done by Kjell Arne.

The data version may be used for historical reference, but might also be used as platform for your own country lists, personal log lists, and lists of several types.

Please note, however, that any new lists produced from this licensed product, have to be authorised by the editors of The AMazing AM before work can start.

You are however, without further notice, authorised to make changes in the listings, by correcting them, or adding information to them.

The editors would be glad to be notified of important corrections and additions.

Comments to the listings.

All in all, we have followed a traditional way of listing the  stations.

The second column has some

1000 v Station was varying in frequency

The third column is for station call letters.

The fourth column is for station name.

There are different ways of listing the name. Both the method of listing all known names in this column and listing older names after an "ex" in the notes after each section are used. The first method is especially suitable for transmitters with several identifications. =, and () means both same as...

and b) for station transmitter site. There are different ways of listing the site. In all cases, we have tried to come as near as possible to the actual geographical spot of transmitter and towers/wire. However, for USA and Canada, the traditional city/town of license is maintained. For these areas, the site may be indicated in the comments column.

For The United Kingdom, the closest known name to the site has been used in some cases, as several of IBA/RA/BBC sites are quite difficult to find on maps, and the original IBA contracting areas were quite approximate. E.g. 1530 Huddersfield&Halifax.Transmitter in the Kirklees area, site name Vicars Lot. On the

other hand, the famous BBC site names are all used.

For Ireland, even actual house is used in some cases.  E.g. John Thewlis, Joe Jackson.

For e.g. Germany, ex-USSR and Spain, the site is indicated after an - of actual city. E.g. 810 Berlin-Charlottenburg. If more is known, the comments will contain this information, e.g.Savignyplatz in this particular case.

The fifth column is for state/county of a particular country. Not used much, but covered for ex-USSR, Mexico, the USA, Canada, and South America.

The sixth column is for country, mainly according to ITU abbreviations.

The seventh column is for a number indicating a note/comment.

The large eighth column is for the year listings between 1945-1992. An x will indicate a logging of the station on the channel in question that year.

The right and last columns deal with FFN, first from Norway, the first known logging of the station, firstly person's signature, and then date.

The notes/comments are for comments on loggins/station or any related topic. These follow each section, and the numbers here correspond with column seven in the main listing.

1993 listings indicating new stations or stations on new channels are in a separate file. Some offshoot lists, plus 1922-1944 listings for some areas, will become available during the next year or so. Write for details. Lists of Long and Medium Wave Beacons, plus Utility Medium Wave are also in the making.

AOF   AF and OF, Lakselv

Kjell Arne is 56 years of age, started DXing in 1975, but is no longer active. He is now living in Kjeller outside Oslo. Kjell Arne works for the Hedmark county public transport authority with ticketing and information systems.

Svenn is 65 years of age. He is now living on Sotra island, to the west of Bergen, and is running the radio stations Radio Northern Star, and The Ferry through Northern Star Media Services AS.

Here is Svenn's self-presentation when writing reception reports 20 years ago in 1994:

My listening equipment also consists of a Hammarlund SP-600 JX-21 radio, made in the USA in the late 50s, plus a Drake SPR-4 radio for longwave, made in the USA in the early 70s, both being of the best there is for long distance reception. 2 different antennas of the long-wire type are utilized, 175 metres to the southwest for the British Isles and the Iberian Peninsula, plus 600 metres to the Southeast for Eastern Europe. Besides, a Sony reel-to-reel tape recorder and a Sony cassette recorder is used.

Let me tell you a little about myself. I am a member of the Arctic Radio Club for AM listening, a joint Swedish/Norwegian/Finnish project. I am 43 years of age, and I started in this wonderful hobby in 1964, listening to Radio Luxembourg and the British offshore stations. Listening to distant radio stations is called dx-ing, and here where I am living, in the little village of Solsvik, right to the west of Bergen, is a particularly favourable position. As you well know, on the lower bands, radio waves, are greatly helped in their propagation by salt water, and on FM you need an open location.

I am a Church of Norway Priest, and my Ministry is in Fjell, meaning"The Rock". The municipality of Fjell has about 16000 inhabitants, and we live to the northwest in this municipality, on Sotra island, about 30 kms from the centre of the city of Bergen, Norway’s second largest city with 210000 inhabitants, well known for musicians and composers like Ole Bull, Edvard Grieg and Harald Sæverud, the spring music festival Festspillene, but also for attractions like Fløibanen Funicular and the old King Hall of Håkonshallen. The entire county of Hordaland,part of Bjørgvin Diocese, has nature varying from flat, windy(as here!) areas at the seafront, to higher mountains inland.

If you look us up on a map, you will find Bergen on about 60 degrees N and 5 degrees E. I live happily here, with my wife and 3 kids. From our house, situated on a hill above the village, we are able to see the burning off of gas on clear days in the Troll oil and gas field, to the northwest, and to the west the open, and often rough North Sea, with the outer archipelago. On the horizon occasionally large tankers going to the Sture and Mongstad oil terminals. Right off the shore are also 2-3 fish farms. To our South and South East sectors a vast open area of mostly stony, wet terrain. 5 kms away to the nearby industrial center of Ågotnes is CCB, Coast Center Base, with occasional visits by rigs and supply vessels.  At the moment we have the Ross Isle here. CCB has its own local VHF service. Here is also the mast of a local radio transmitter, the Decca chain longwave rig for this area.

Quite often, the helicopter routes of Helikopter Service, Braathens and Mørefly pass over our house to and from the North Sea oil fields. In the South the mountains of Kvinnherad may be seen, and to the north of Gulen, in Southern Sogn. To the East we can  see the lights from Bergen at night, and in the daytime we can see the highest mountain of the Bergen area, the Gulfjellet, plus nearer mountains with the Bergen Radio(coast radio station) VHF mast at Rundemanen,(Bergen Radio’s MF transmitters plus one of Rogaland’s are at Marøy, just to the North) plus the NRK FM and TV mast at Ulriken. The best NRK output are the regional programs of NRK Hordaland(radio) and Vestlandsrevyen(TV). From this same mast  the signals of our new television channel TV2, plus 3 local radio channels are also broadcast. TV2 has its main center and studios in Bergen. The most popular local stations are Puddefjord Radio, 104,1/106,1/107,8 , with a varied format of older and newer music, Radio 1FM, 105,8/106,7/107,1 FM, of the same company broadcasting the current hits. Our local radio station here, Radio Sotra, 104,5/105,5 is also no.3 in Bergen,with a “format” of everything! On Askøy, now  connected to Bergen by means of a  large bridge, the masts of the closed NRK AM transmitters on 890, 20000 watts,(Closed 1978) and 1115 kHz, 1000 watts (Closed 1966) still stands as they were left.

We also have a local television station,TV-Bergen/Bergen BY-TV. Also mentioned might be Kystradioen,KYST FM,("coast")105,8/106,7/107,1 FM STEREO, a Christian station with a heavy accent on news from the 5 municipalities around Bergen. I worked myself there as a presenter 1991-1993 part-time and did an Oldies/Contemporary Gospel show on Thursday mornings, using PAMS jingles(licensed!) from the 60s and had great fun. This is broadcast from the same complex and studios where Radio 1FM and Puddefjord Radio are housed.

I have heard over 500 North American AM stations, and also many from the Caribbean, Central and South America,this mostly when I lived in Bud, northwest of Molde. I have also been quite  active in the fields of offshore radio, and British and Irish broadcasting. Here, I mostly concentrate on European listening.

In addition to Kystradioen, I have worked part-time for the NRK. I am now working behind the scenes for a new station. 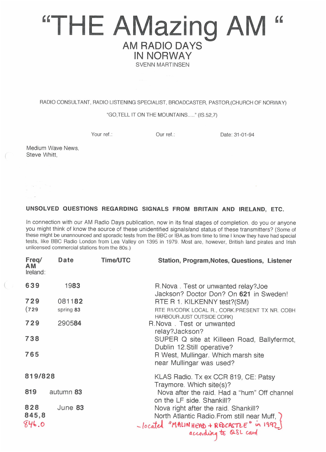 Many inquries went out in letter form and phone calls to correspondents. Here is an excerpt of the letter to the Editor of Medium Wave News, Steve Whitt in early 1994.

In tribute to the late Norwegian DX-er Per Ingebretsen

and these great radio stations heard in Norway:

Thanks for the memories!

Also to these great radio personalities heard in Norway:

Thanks for the memories you made: