Aloha in the Village…

As you probably know, some of the background of the Northern Star project is the proud tradition of radio listening. A ”cousin” of the radio amateurs(”hams”). I have been active in this field since 1963.

The name of this most fascinating hobby is “DX-ing”. DX is an expression coming from the radio ”hams” meaning Distance.

DX-ing then is the sport where you listen to the faraway stations.

If you are able to be alert, that is helpful for good results. For the conditions vary from day to day.

It was October the 18th, 1986. I was quite exhausted after intensive days in the Ministry, so the weekly day off was most welcome.

I used the occasion to erect a 700 metres antenna wire pointed towards Alaska and the Pacific.

Back home at the Rectory a couple of hours later I immediately turned on my SP-600 receiver of the famous Hammarlund brand to monitor the radio conditions.

On the MW there were indeed Alaska stations with good strength.

Two in Fairbanks were noted, KCBF 820 and KRKO 1300 AM. And that same evening, two Longwave Beacons were noted on the Tandberg Sølvsuper Domestic: ISD 304 from Kapp Linné on Spitsbergen, and then on 310 kHz ST Maniitsoq, Greenland. I immediately understood the possibilities involved, as evidently the Trans-Polar Route was wide-open and undisturbed.

The next morning the AM band was packed with stations from the Western United States. It did not take long before I heard the first Alaska stations, such as KABN 830,”The Cabin” in Big Lake and KJNP, “King Jesus North Pole with its rural Christian format.

The strength of the signals rose dramatically at local Sunrise. From Anchorage 50 kW KFQD played its “Rhythm of Alaska”, and KKEN in Kenai with only 1 kW had a big Rockabilly-sound. And from the West Coast of the USA you were given the big treatment from stations like KPNW 1120 in Eugene, Oregon, and KNX 1070 in Los Angeles.

On AM 850 a Canadian from the Big Prairie is heard. Yes, it is CKRD from the Red Deer Valley. Co-channel KICY in Nome, Alaska is also present, easily recognizeable with Christian Russian programs directed to what was then still a Communist country. It closes at 1000 my time with the ”Star-Spangled Banner.”

CKRD stays on the air, but together with this fine catch from Alberta a new station comes up, with the same kind of light pop music. I note that there is a female dj on this one.Later, it emerges that her name is Leola James.

At 1100 hours the station is dominating. The Station ID is read: “KHLO-Hilo”.

WHAT? What did she say? “KHLO is owned and operated by the Mid-Pacific Broadcasting Company...” It is their sign-off procedure!  For: Hilo is on Hawaii, and Hawaiian Standard Time is Midnight! Outside it is broad daylight…

A radio station with only 5000 watts had found its way 10500 kilometres, over the Pacific, Alaska, North Pole, and the North Atlantic, to a little fishing village at Hustadvika on Norway’s North Western Coast.

It was the first reception of KHLO in Norway, and the first ever South of the Polar Circle.

News editor Russ Roberts writes in the confirmation, the QSL(as both dxers and hams call the proof sent out of the catch), that all of the station staff were excited of the faraway reception.

They may happen in the AM band. 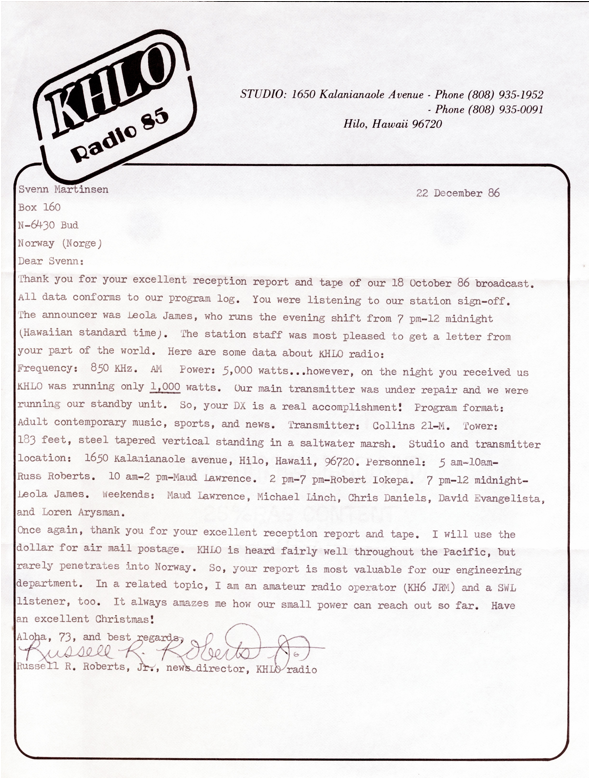